If you are younger then18y, please, leave! 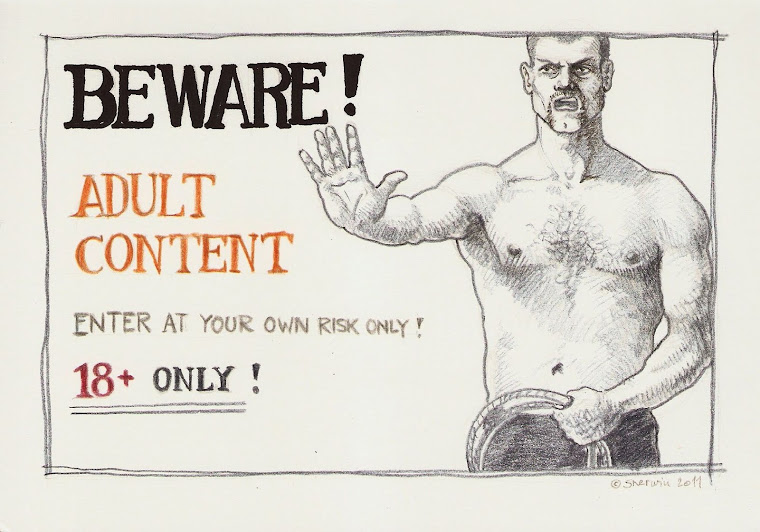 Warning!
In this blog you can find immages (mostly drawings) that can be disturbing and not acceptable to view for everyone. It is only fantasy and has no connection with reality. But, in any case, if you think you might feel upset by these creations, please, LEAVE!
The same rule for minors - if you are under legal age, please, leave this blog!

Impalement - part of the commission

I brushed some dust off this old drawing of mine... not in the right mood these days, so this must do for now.

I hope some of you might still find it amusing. In a way...

Let me know what you think... 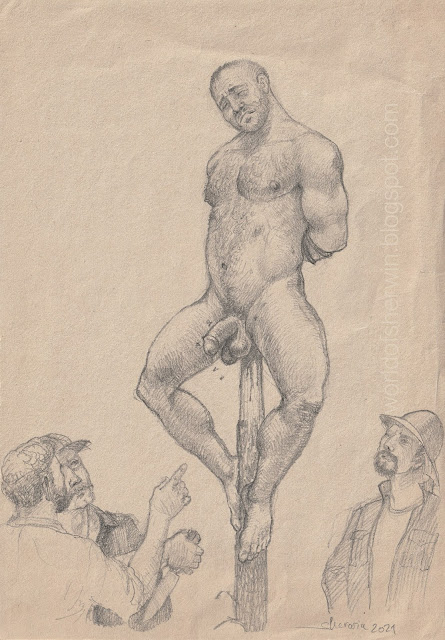 This drawing was started and finished as an illustration to a story writen by John Dee Cooper in the past. It was inspired by work of another artist - Mike Carcel. My illustration is depicting the closing scene - the very end of the story. I recommend to read the story even though it is not for everyone. The author of the story plans some edits to it, but made it accessible as it is now, here, through this link.

Here is my illustration. 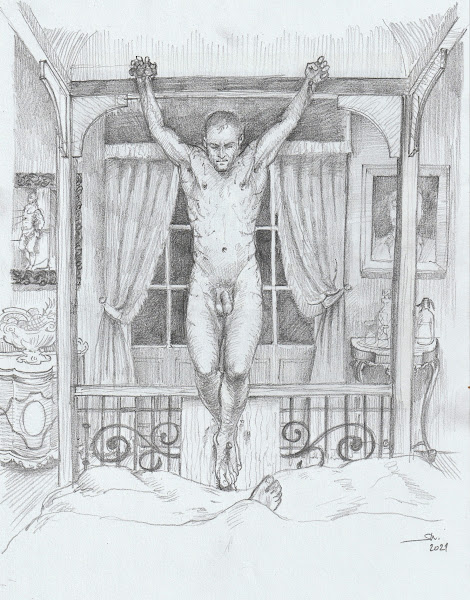 The young man, nailed to a cross, awaiting further treatment... 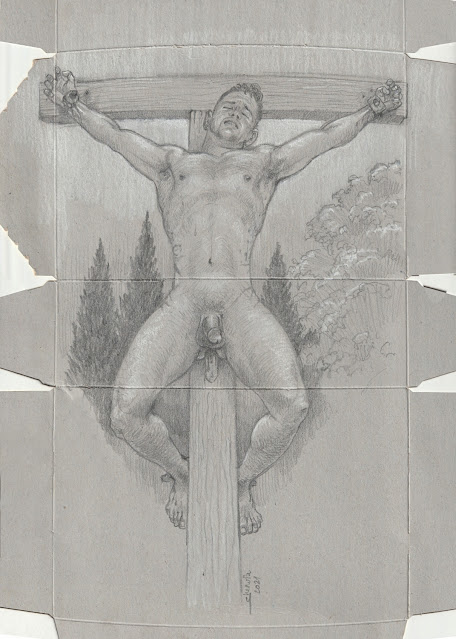 This drawing started as a doodle - I used first paper at hand - cardboard box...

They took them out, individually, and led them for inspection to a processing room... tied them to a butchering block and after thorough cleaning, measuring and inspection they fucked them...

After that they put them back into the cell. When the morning was coming, they made love... for the last time.

Later they came for them and brought them to the processing room again. After a repeated cleaning they hang them upside down by their feet and started processing... everything being watched through glass walls by paying customers - future consumers. The most honorable ones have the privilege to do some parts of the processing themselves, under the supervision and with the help of professionals... for the special fee, of course. 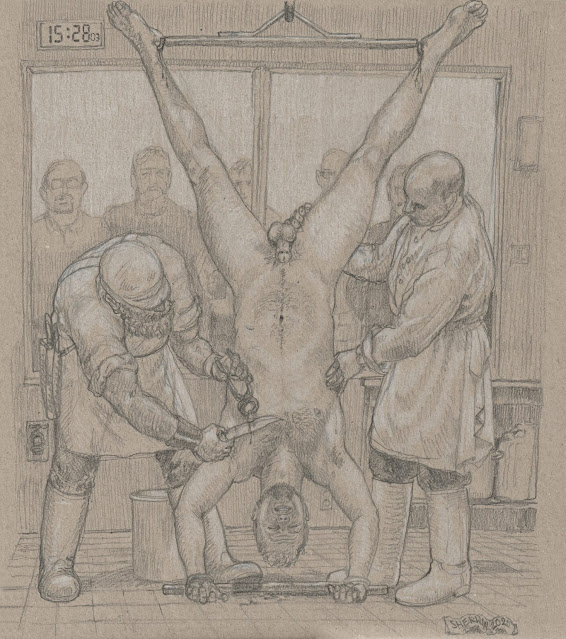 Another study for Sebastian... for this posed Stephan in one of his amazing photographic selfportraits... What do you think?

It is not the "polished" finished drawing I tend to post mostly... but since I had a very long pause in posting, I was thinking even the study might please my readers and followers...

I hope you all are staying safe and healthy! In the end - St. Sebastian is the saint who protects against disseases.. ;-) 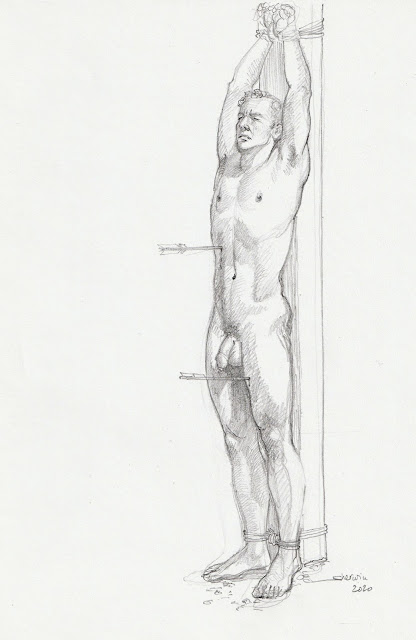 yet another doodle - tree crucifixion 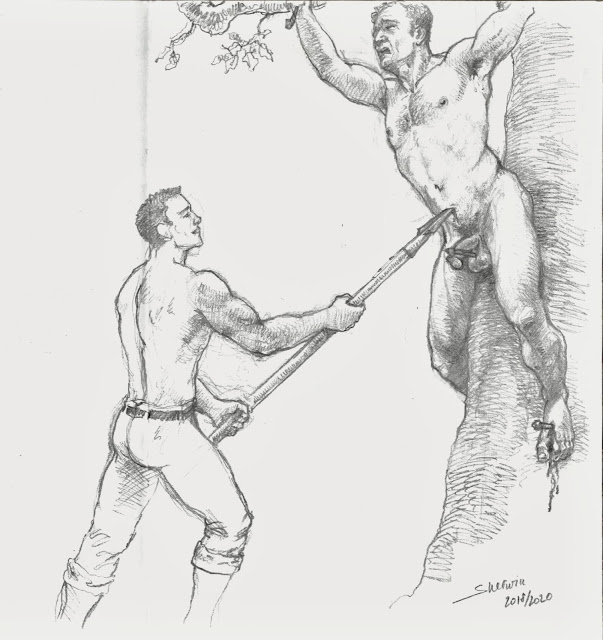 After some time the man was nailed to a tree, nails through his wrists and feet, fixed in possition by one additional nail piercing his nutsack, the guard came to have some fun finishing him by spear...
Vystavil Sherwin v 15:00 1 komentář: 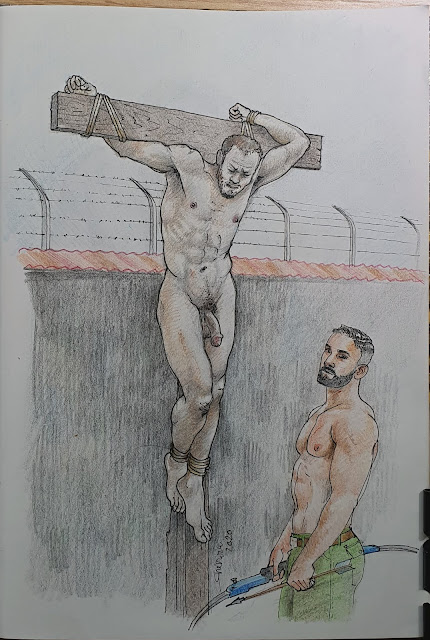